11 alternatives to the Bali airport taxi

The Bali airport taxi gets a bad feedback on online travel forums and many visitors are happy to pay a little extra for a more reliable and smoother service.

Find out what the “official” rates are for the Bali airport taxi.

There are quite a few other ways of transport to leave the airport and over the last few months several new options have even become available.

Private Driver: continue here for rates and more information on a private Bali airport transfer or day tour in Bali.

If you are travelling with your family or lots of luggage then a larger size private car transfer will work out better. There are hundreds of freelance drivers in Bali who work independently or with a small team of friends / drivers. Some of these drivers are excellent tour guides as well.

The Bali airport is accessible by public bus as of 17 September 2015. The bus company is managed by the Bali Province and is called Sarbagita. This is an acronym for Denpasar, Badung, Gianyar and Tabanan which are 4 (of 9) regencies this bus services.

The bus has three routes (Koridor) from which two visit the Bali Airport. These are Koridor II and Koridor VIII.

There is a bus every 15 minutes. It stops at the International arrival terminal on the ground floor. You can find it on the furthest left corner where the airport taxis park as well.

Some of the fancier hotels charge inflated rates for a private transfer. It is worth comparing what price you can get from a private driver or what you would pay for an airport taxi. 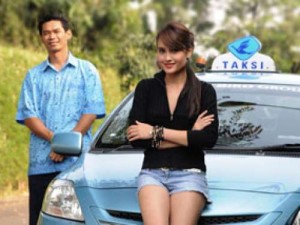 You can catch a regular meter taxi (e.g. Bluebird) to leave the airport. You are not really supposed to do this as Bluebird and other meter taxis do not pay the license fee to operate in the Bali airport. Nevertheless, it is a possibility.

If you are at the arrival terminal you will need to walk to the departure terminal.

At the departure terminal you will find regular meter taxis dropping of customers/passengers who are about to leave Bali. Wait until the previous customer has paid and then hop into the taxi. The meter taxi driver will want you to get into the taxi as fast as possible as they are not supposed to pick-up customers. Also note that this option is getting more popular and you may find some uncontrolled competition from fellow passengers trying to get into one of these meter taxis.

Get an Ojek (motorbike taxi) at the domestic arrival terminal. Ojeks will usually wait around Starbucks & Burger King. After you agreed on a price you will need to walk to the parking lot for motorbikes which is about a 5-10 minute away.

As this is on a motorbike you cannot really have much luggage. Rates are not that much better than a taxi and an Ojek is not really recommended.

Same as the above motorbike taxi except Gojek is booked through an app (very similar to Uber). You will need to have the Gojek app installed on your smartphone. As Go-jek drivers don’t standby at the airport you will need to book this in advance or prepare to wait until your driver gets there.

Only recommended if you travel light and know your way around.

Uber Taxi has recently been banned in Bali. Although it looks as if this is definite there is always a small chance that Bali will lift the ban. We understand that it is at this moment still possible to book an Uber Taxi through the smartphone App.

Before the Ban Uber was available in South Bali. They do not travel as far as Ubud. To book a Bali Uber driver you need to have the Uber app installed on your smartphone. 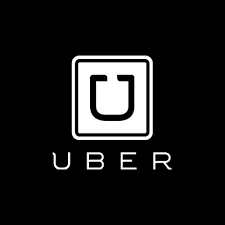 Learn more on how to recognize if a car is licensed to take passengers or not.

Similar as Uber Taxi. Their head office is based in Malaysia. They are currently in six countries including Indonesia. Mostly in Jakarta but slowly entering Bali as well. You will need to install an app on your smartphone to book a Grab Taxi.

This is one of three new local companies that have a desk at the domestic terminal. This is a cooperation of freelance drivers who work together. They all have their own cars. Some have a Suzuki APV, Toyota Avanza or Toyota Innova which are all three spacier than the standard airport taxi.

These yellow, blue and red car companies have a desk right next to eachother. Ask for a price at each counter and go with the best deal. 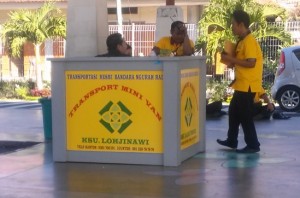 Same as the yellow drivers above but different group of drivers. Their blue desk is pretty much right next to the yellow desk. 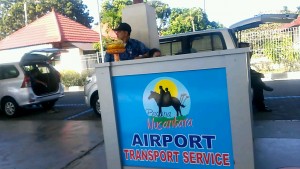 Pretty much identical as the yellow and the blue desk above but a different group of drivers. Same type of cars. 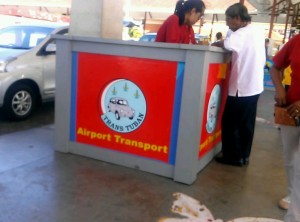 How do you leave the Bali airport?