You can find a detailed itinerary from this Bali day tour below.

Book your private Bali day tour today. After you click the “Book now” button below you will be taken to the booking form.

On this booking form we request your contact details (name & email) as well as date, your hotel in Bali and the pick-up time for your tour.

We look forward showing you the real Bali!

Explore the East of Bali which is rich in the historical and cultural legacy of the two kingdoms of Klungkung and Karangasem. Visit the 18th century Hall of Justice, learn how salt is farmed using century old methods, wander through a water palace, visit a picturesque village where time has stood still and finish your day viewing one of the six holiest temples in Bali.

Kertha Gosa is located in the heart of Klungkung, the smallest of Bali’s nine regencies. Kertha Gosa means – “the place where the king meets with his ministries to discuss questions of justice.”

The Kertha Gosa Pavilion was built in the early 18th century with its first function being the court of law. Besides the beautiful architecture of the building, the uniqueness of Kertha Gosa lies in the ceilings of the pavilion which are covered with traditional paintings in Kamasan style.

Each part of the ceiling tells a different story; there is one part that tells the story of karma and reincarnation and another part illustrates each phase of human life from birth until death.

Kusambe is a sleepy fisher village along the East Coast of Bali. Here salt is gained from the ocean by a centuries old tradition that is passed through many generations.

Several layers of salty seawater are sprinkled over a patch of black volcanic beach. After these layers of salt water have dried the top layer of black sand is collected. This sand is then watered down again to filter out a solution of highly concentrated salty water. 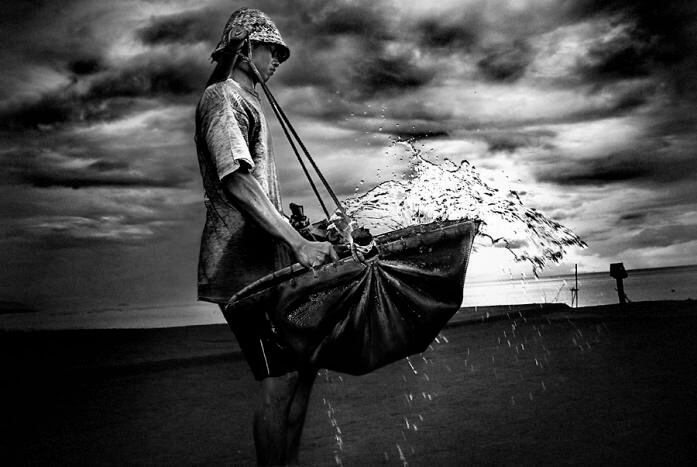 This salty water will go under the sun again to naturally dry until salt crystals start to appear. The salt is then collected and ready for consumption.
This naturally produced salt has a unique flavour and is popular among the Balinese. If you wish you can buy a small portion of this locally produced salt direct from the farmers.

Tirta Gangga literally means water from the Ganges and it is a site of reverence for the Hindu Balinese. Tirta Gangga water palace is a maze of pools and fountains surrounded by a lush garden and stone carvings and statues. 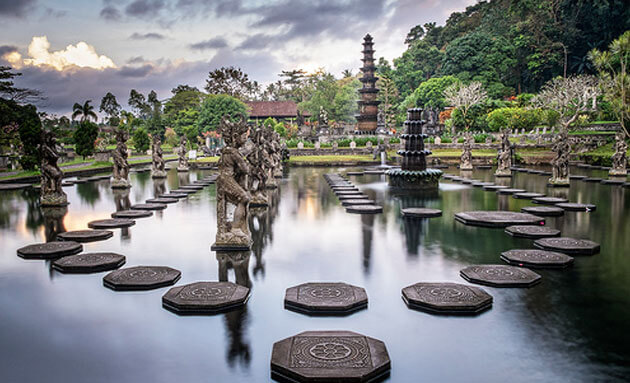 The one hectare complex was built in 1946 by the late King of Karangsem but was destroyed almost entirely by the eruption of nearby Mount Agung in 1963. It has been lovingly re-built and restored and has an air of authentic royal magnificence.

Life has stood still in Tenganan Village which is home to the “Bali Aga” people. These are the indigenous Balinese who were in Bali long before the Majapahit Era when the East Javanese Empire ruled over much of Indonesia, including Bali, in the 14th and 15th Century. 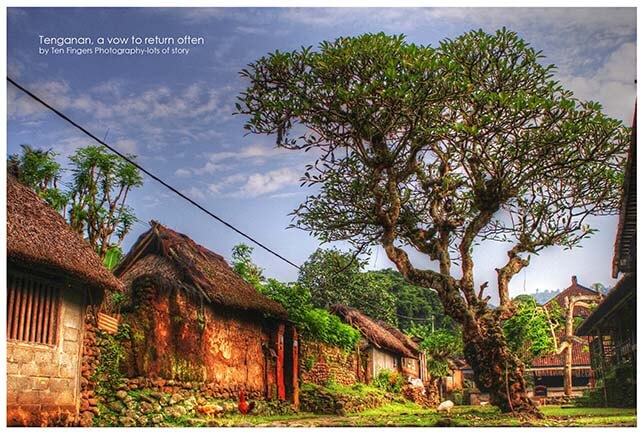 Tenganan is well known for their Lontar books which are created from the palm leaf on which intricate drawings have been etched, usually depicting scenes from the Hindu epics. In Tengenan you can also see the process of weaving the “Kamben Gringsing” which is a double woven cloth using a difficult traditional technique where both the warp and weft threads are dyed before the fabric is woven.

Goa Lawah is one of the six Sad Kahyangan Jagad or the “six sanctuaries of the world”. These are the most holy places of worship in Bali and visited by Balinese Hindus from all corners of Bali. 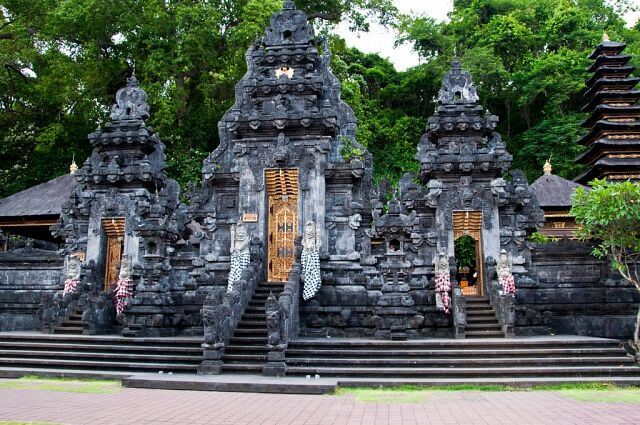 The Goa Lawah temple was originally built in the 11th century around a cave. This cave is the home of thousands of bats hence the name Goa Lawah which translates to “Bat Cave”.

This bat cave is believed to connect underground to Mount Agung (Besakih Temple), Talibeng and Tangkid Bangbang. There are various accounts that when the Agung volcono erupted in 1963, ash emerged from the Goa Lawah cave.

There are no reviews yet.

This website uses cookies to improve your experience while you navigate through the website. Out of these, the cookies that are categorized as necessary are stored on your browser as they are essential for the working of basic functionalities of the website. We also use third-party cookies that help us analyze and understand how you use this website. These cookies will be stored in your browser only with your consent. You also have the option to opt-out of these cookies. But opting out of some of these cookies may affect your browsing experience.
Necessary Always Enabled

Any cookies that may not be particularly necessary for the website to function and is used specifically to collect user personal data via analytics, ads, other embedded contents are termed as non-necessary cookies. It is mandatory to procure user consent prior to running these cookies on your website.